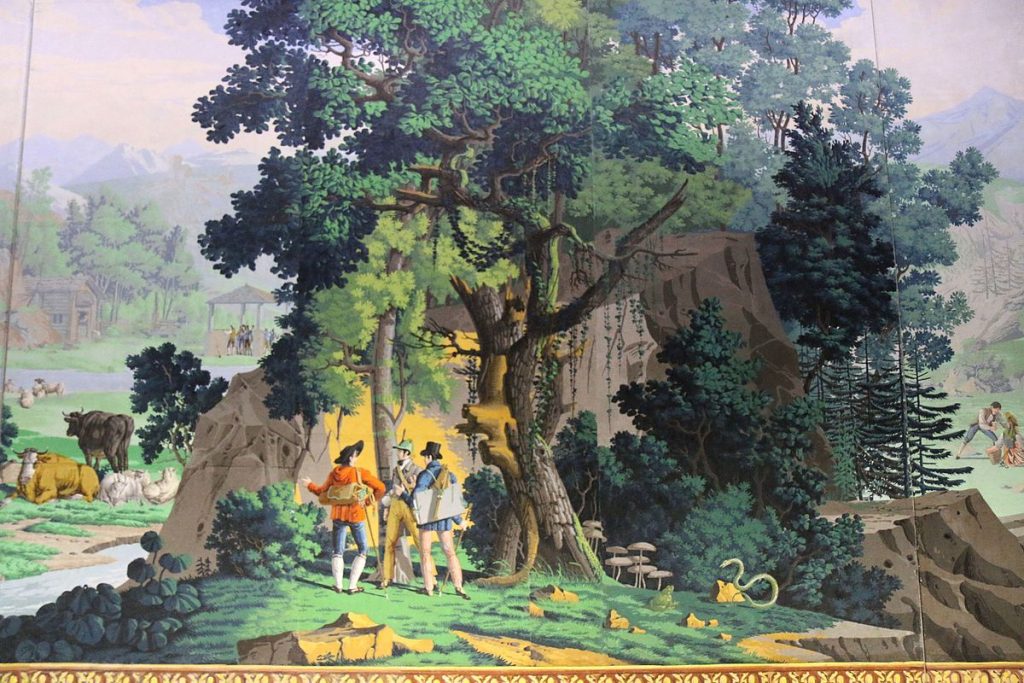 Description: A decorative craze which gripped Paris during the French Empire was for ‘papiers peints panoramiques’, wallpaper which, when strips were aligned, turned into a wide scene, like a fresco. This often replaced ‘boiseries’ or panelling as the main decorative programme of a reception room. Robert Barker’s Panorama, inaugurated in London in 1787, had enthused spectators. It allowed them, from a viewing platform, to be surrounded on all sides by a painted backdrop representing a cityscape like Edinburgh or Constantinople or indeed a battlefield. The design was much imitated and panoramas became hugely popular throughout Europe (1). Obviously private houses, however grand, could not copy the scale of this tourist attraction, but panoramic wallpaper, when used throughout a room, sought to give you a similar immersive experience.

Based in Rixheim, in Alsace, since 1797, and still operational today, the Zuber manufacture was, during the Romantic period, the unquestioned champion of panoramic wallpapers. Developing techniques which earlier trompe-l’œil had showcased, their prestigious printed papers offered an opening onto the world, giving an illusion that a stylish French urban drawing-room, for instance, looked over a vista including Pacific Islanders, Hindustani elephants, Chinamen or European countryfolk in a peaceful rural idyll. The eighteenth century had made the Swiss mountains fashionable with Haller’s German poem Die Alpen (1732) and Rousseau’s French novel, Julie ou La Nouvelle Héloïse (1761), constituting pivotal moments in the promotion of the landscapes and the celebration of the virtuous and simple mores of their inhabitants. Both were widely translated and imitated. Travellers sought to see the mountains, waterfalls and lakes for themselves. Many penned their own lines or brought back sketches of scenery they had enjoyed. It is no surprise therefore that Alpine chalets and peasants figured amongst the models on offer in Zuber’s selection of wallpapers. In 1804, engravings of Switzerland showing specific beauty spots formed the basis of the earliest panoramic sets. Subsequently, Pierre-Antoine Mongin (1761-1827), a classically trained artist renowned for his depictions of battles and rural landscapes, travelled to Switzerland to seek inspiration for further views in an attempt to strike a balance between the scale of the mountains and the characters. The resulting design for Zuber was to be a triumph of the genre. Known as L’Helvétie, or sometimes La Grande Helvétie, the set was made up of twenty woodblock printed panels with the light coming from the left for one half and from the right from the other. The Oberland glaciers offer part of the backdrop. According to the size of your room you could have a wider or narrower view on one wall, with or without a lake, for instance. Practicalities meant that the 20-panel set could be split and a single drop or two or three could offer an interesting prospect. There are options to hang the paper directly or to raise it onto a decorative strip or a border representing a colonnade, according to the height of the room.

The prospectus advertising the desirable and costly rolls is at pains to explain that this is a sort of epitome of “Swissness” rather than presenting exact views even though the painter had been in situ. (2) Some of the figures were borrowed from other artists and they were deliberately depicted wearing costumes from different localities. The manufacturer sought to underline the printed paper version’s proximity to an actual painting: “jamais dans ce genre on n’a poussé aussi loin les moyens qui pouvaient rendre l’effet d‘un tableau“. It set out to be the absolute summit of the genre and the publicity pointedly observed that no expense had been spared in the conception or making of the wallpaper.

The brochure also describes the different panels. I would like to mention two of them briefly. In the first, on left, there are two travellers, a painter and a naturalist, with their guide. (3) The conceit is obviously one intended to allow viewers—who were often already readers of Rousseau, Saussure or Coxe, for instance—to project themselves on the characters and, as their eyes travel along the scene, to feel that they are enjoying the same experience as the voyagers and possess some of their skills.

In the 16th panel, we are told that the cowman is playing the Ranz des vaches on his Alphorn, and it is to this country air that a family is dancing. (4) The detail is gratuitous: nothing shows us the air. Only the prospectus indicates the tune. The text describing a painted scene thus strives to conjure up a soundscape. The Ranz des vaches was said to be the musical prompt which made Swiss mercenaries desert their regiments, so powerful were its effects in conjuring up a vision of home. With this sonorous patronage, the artist is implicitly indicating that his panorama is as close to Switzerland as you can get without actually travelling there. Writers like Rousseau, but also Achim von Arnim and Brentano, Thomas Moore, Senancour and Ramond de Carbonnières wrote about the Ranz des vaches. Several composers were inspired by it. Think of Grétry, Rossini, Beethoven and Berlioz, but also of Liszt: it is one of the themes of his work titled Fantaisie Romantique. The Ranz des vaches defined nostalgia and is a metonym of it here. The picture becomes a vision not only of a virtual Switzerland, but also of a lost world of sublimity and innocence.

The project of creating the designs for the wallpaper took longer than planned because of the unrest in Europe and then the changes of regime in France. However, Zuber’s investment paid off. The panoramic ‘Grande Helvétie’ wallpaper showing Switzerland was a great success: 807 series were sold between March 1815 and December 1824; part of it was exhibited at the 1819 Exhibition. It was issued until 1865 and no doubt helped to shape the vision of romantic Switzerland, at once sublime and tame, with its craggy peaks and burbling brooks that modern day calendars continue to circulate.