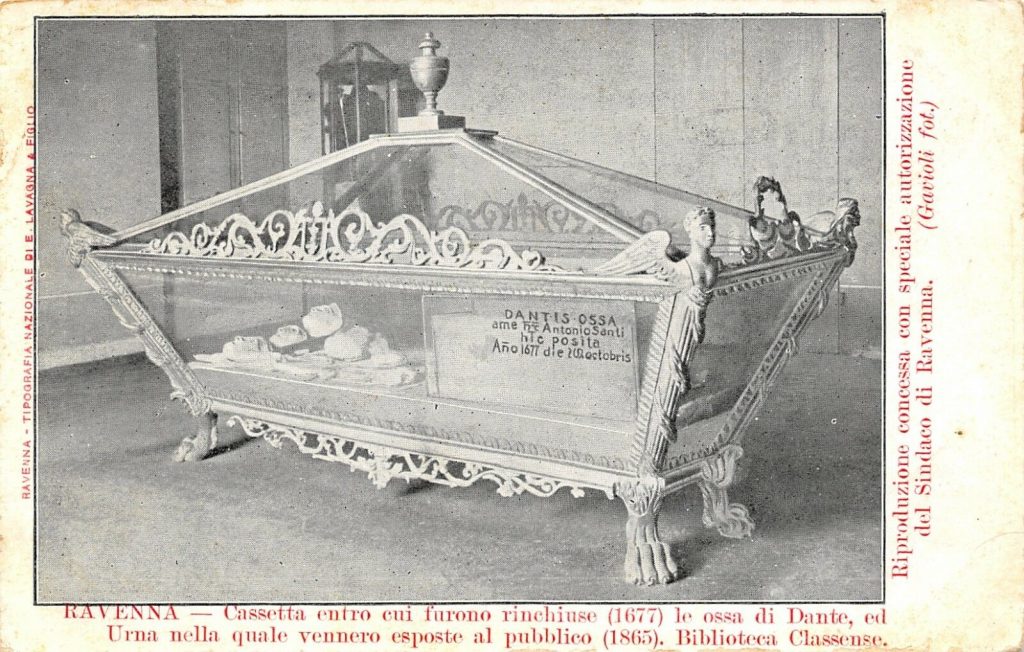 Description: On May 27, 1865, in the small provincial town of Ravenna, a spectacular event occurred that made headlines all over the world, from New York to the East Indies. The mortal remains of one of the greatest poets that had ever lived, Dante Alighieri, were discovered after having been lost over some 350 years. Coinciding with the celebrations marking the sixth centenary of his birth — in Ravenna and well beyond, particularly in Florence — this remarkable event fueled unprecedented curiosity, coercing the local authorities to publicly exhibit Dante’s bones and the simple wooden coffin that had contained them for centuries. To such purpose this crystal showcase was used. During one month, from May 27 until June 26 1865, the public was allowed to see what remained of Italy’s national poet, an experience never to be repeated again. While satisfying the audience’s urge to establish a direct connection to a man as highly venerated as Dante was, the exhibition of his bones also revealed something about the cult of the author. As a consequence, this episode of hero worship signals a paradigmatic instance in a field where popular curiosity, scientific interest and concerns of heritage conservation meet and clash.

An exile in Ravenna, Dante died in 1321 and was buried with great honours in an already extant sarcophagus present in an outer wall of the church of the Franciscans. At the end of the fifteenth century, this tomb was integrated within a newly built chapel financed by the Venetian governor Bernardo Bembo and adorned with high reliefs executed by the leading sculptor Pietro Lombardi. In the present-day funerary chapel — which was inaugurated much later, in 1782 — this beautiful altar by Lombardi is still the focus of attention.

Yet Dante’s grave was not undisputed. Though he was exiled from Florence, at various instances representatives of this Tuscan city claimed his remains, in order to use them as the central asset in their plans to construct a Pantheon for the most illustrious citizens it had engendered. These claims had been systematically rejected by the Ravenna authorities and populace, proud as they were of this famous person being buried in their city. In the early sixteenth century, when Ravenna came under papal rule, the Florentine claims became dangerously pressing, as they were supported by the pope himself, Leo X, a prominent member of the Florentine Medici family. When in 1519 a Florentine committee travelled to Ravenna in order to collect Dante’s remains, to their utter surprise they found the tomb to be empty. Probably some of the Franciscan friars responsible for the grave had taken the bones out in anticipation of the Florentine expedition. And they hid Dante’s remains in such an effective manner that outsiders were unable to trace them. For centuries, Dante’s bones were known to have been mysteriously lost.

The 1865 rediscovery of Dante’s bones was a genuine sensation. While making some adjustments to a wall in the Franciscan convent, by chance the two masons working on this job, Pio Feletti and Angelo Dradi, discovered the simple wooden box dating from 1677 housing Dante’s bones which contained an inscription explaining its precious contents. In 1865 this was placed in a crystal showcase, and both are presently on exhibit in Ravenna’s Dante museum. The moment of rediscovery was so significant that shortly afterwards it was repeated and photographed in order to document it and to use it for the production of postcards. The scene was also reproduced in many newspapers all over the world.

The unprecedented public interest in this discovery, as well as the massive attendance at the bones’ exhibition through June 1865, surprised many, including a young local intellectual much concerned with his city’s heritage, Corrado Ricci (1858-1934). In his meticulous reconstruction of the episode published many years later in his L’Ultimo rifugio di Dante [Dante’s Last Resort] (1921) he reports on the feverish atmosphere the exhibition produced amongst the audience, resulting in frequent attempts to steal part of the bones. Such uncivilized behaviour made him aware of the negative instincts material heritage, and particularly objects related to famous forebears, may produce. Later, while embarking on a career in civil service and developing — as one of its pioneers — public policies on heritage management, he would advocate a cautious and restrained way of handling such objects. Thus, when at the occasion of the sixth centenary of Dante’s death in 1921 the poet’s tomb once again was opened, as a national minister for culture he prohibited exhibiting the bones and restricted access to them to a small group of scientists eager to examine them. But he came to regret even this decision.

Already in 1865 scholars had demonstrated great interest in studying Dante’s bones. Flattered by such attention, the Ravenna authorities had allowed some of them to measure the poet’s remains and publish their results. This produced new evidence to be used by craniologists eager to establish hierarchies of the human species, on the basis of the physical proportions of persons considered to be exceptionally gifted. The same situation presented itself in 1921, when a young scholar from Bologna, Fabio Frassetto, was allowed to make new and more precise measurements. His ambition was to reconstruct Dante’s face. Such an endeavour would earn him wide recognition, far beyond academia, since no portrait of Italy’s most important poet was known and his physical appearance remained a mystery. Yet he had to face the opposition of Corrado Ricci, who feared misuse and indeed desacralisation for private purposes of Dante’s remains. And he was right. In his monumental book on Dantis Ossa [Dante’s Bones] published in 1933, Frassetto not only gives the results of his measurements but also speculates on how Dante might have looked while alive. But only after Corrado Ricci’s death in 1934, did he feel safe enough to produce actual reconstructions of Dante’s face, something that Ricci explicitly had prohibited for fear of trivialization. In the late 1930s Frassetto commissioned the sculptor Alfonso Borghesani to make a bust of Dante based on his reconstructions. This turned out a most popular artefact. Indeed, partly as a result of the worldwide promotional tour Frassetto undertook after its completion, this particular bust still adorns many university halls all over the world.

Media:
1) Photograph of the (staged) rediscovery of Dante’s bones on May 27, 1865 (public domain)
https://it.wikipedia.org/wiki/File:Scoperta_ossa_di_Dante.jpeg

2) Photograph of the exhibition of Dante’s bones in May-June 1865 (public domain)
http://badigit.comune.bologna.it/Fotografie/dettaglio.asp?lettera=1210

3) Photograph of Corrado Ricci (man on the left) inspecting the wall where Dante’s remains were rediscovered in 1865 (public domain)
http://badigit.comune.bologna.it/Fotografie/dettaglio.asp?lettera=1209

5) The reconstruction of Dante’s face as produced in 1938 by Alfonso Borghesani following instructions by Fabio Frassetto (public domain)
http://catalogo.fondazionezeri.unibo.it/scheda.v2.jsp?tipo_scheda=OA&id=83536&titolo=Borghesani%20Alfonso/%20Frassetto%20Fabio,%20Ritratto%20di%20Dante%20Alighieri&locale=it&decorator=layout_resp&apply=true