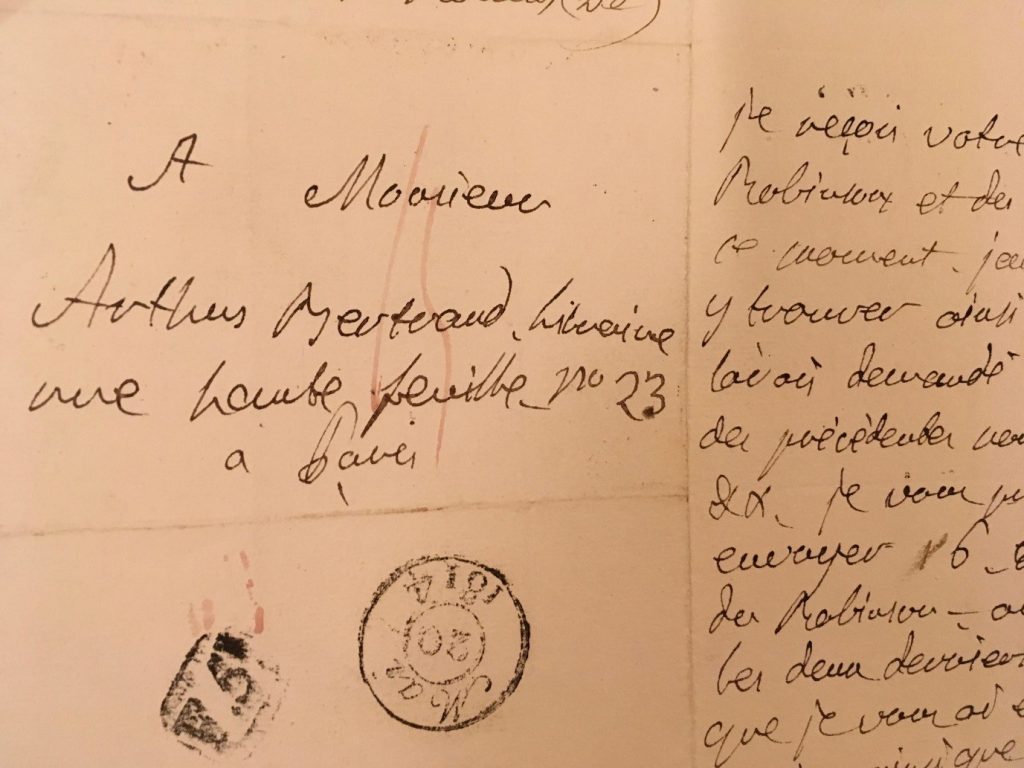 Description: A letter from Isabelle de Montolieu to Arthus Bertrand, dated 3 May 1814.

On the surface, nothing links this unassuming letter – from the Franco-Swiss novelist Isabelle de Montolieu (1751-1832) to her Paris-based publisher Claude Arthus-Bertrand (1770-1834) –  to ‘England’s Jane’. Yet Isabelle de Montolieu may now be best-known – or of most interest to a general reading public – as the first translator of Jane Austen. And Claude Arthus-Bertrand was Austen’s French publisher in her own lifetime – a fact certainly unknown to Austen and doubtless also unknown to John Murray II, whose publication of Austen’s Emma (1816) appeared in Paris under Arthus-Bertrand.

Isabelle de Montolieu was – in her own lifetime – best known for her French sentimental novel Caroline de Lichtfield (1785), a ‘beauty and the beast’ type narrative. Jane Austen read it, and admired it, and it was greatly admired across Europe: Thomas Holcroft (1745-1809) the novelist, miscellanist and dramatist, was the English translator. There is considerable evidence that a great many readers in Britain admired and read the French original too.

The Anglo-Irish author Maria Edgeworth met Montolieu in Lausanne in September 1820. Montolieu spoke to her fellow novelist about her own composition practices: ‘I never’, said she, ‘could invent an original story – but give me the first hint and I can go on and supply all the details and characters and feelings’. This practice of ‘embellishment’ certainly informed most of Montolieu’s translations: her translation of Austen’s Sense and Sensibility (Raison et Sensibilités ou les deux manières d’aimer, 1815) takes great liberties with Austen’s source text, changing the ending radically to fit the horizon of expectations of readers of the target language: that is, the admirers of the sentimental novel on the continent.

There is no mention of Austen’s novels in this letter – in fact, the focus of the note is on the Swiss Family Robinson, the 1812 Swiss-German novel by Johann David Wyss that Montolieu translated into French in 1813. Montolieu’s celebrity and popularity was such that it was her translations that became the source text for the European spread of the novels she translated. It was her Swiss Family Robinson that was translated into English, and her version of Jane Austen’s Sense and Sensibility and Persuasion that travelled across Europe in the nineteenth century.

This letter is now owned by Chawton House Library – a recent gift from a supporter who purchased it from a bookseller in the US. It takes its place in a collection that – by its association with the author Jane Austen through her wealthy brother Edward Austen, later Edward Knight – is in itself a site of literary pilgrimage.